Rifted margins result from rifting and continental breakup, and often contain remnants of their rifting history in their complex structural architecture. Seismic studies reveal that magma-poor and magma-rich margins are not just a simple juxtaposition of oceanic and continental crust, but that the transition between the oceanic and continental domains may include various crustal bodies such as microcontinents and continental fragments. Microcontinents present a perplexing formation scenario: seafloor spreading ends in a region that is already warm, and thus weak, and is initiated elsewhere in a region of stronger lithosphere. In this project, we investigated various scenarios for microcontinent formation using dynamic numerical models. The project was financed by Det Norske.

Numerical and laboratory models are often used to investigate the evolution of deformation processes in the crust and lithosphere. In both approaches, the freedom in choice of simulation method, materials and their properties, and deformation laws could affect model outcomes. To assess the role of modelling method and to quantify the variability among models, we have performed a comparison of results of 11 numerical codes and 15 laboratories for the same setups. We chose three experiments that describe shortening of a sand-like, brittle wedge.

Numerical modelling of the Wilson Cycle

The Wilson Cycle describes the closing and opening of an ocean along the same plate boundary (J.T. Wilson, 1966, Did the Atlantic close and then re-open? Nature 211, 676-681). For example, the Iapetus Ocean between the Norwegian margin of Baltica and the Greenland margin of Laurentia closed by subduction and collision around 425 million years ago. This led to the formation of the Caledonide mountains and the high-pressure rocks now exposed in western Norway. Extension caused break-up of the new continent and the formation of the North Atlantic Ocean from around 54 million years ago. In this project, we investigated the dynamics of the different stages of a Wilson Cycle: closure of an ocean by subduction, the end of convergence by continental collision, and subsequent rifting. The project was financed by the Norwegian Research Council (project 180449/V30) and the Geological Survey of Norway. 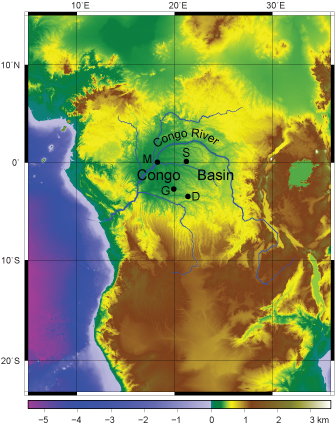 The Congo Basin in Central Africa is characterised by a near-circular shape, pronounced negative free-air gravity anomaly, and long subsidence history. The basin probably initiated by late Precambrian rifting of thick cratonic lithosphere and a large part of its subsidence history could be explained by post-rift thermal relaxation. However, the upper 1 km of Mesozoic to Cenozoic sediments seems discontinuous in its evolution and several studies have proposed that these sediments were deposited in response to mantle processes. We examined gravity data and 18 seismic tomography models to evaluate the role of the sub-crustal mantle in the more recent evolution of the Congo Basin. Current seismic tomography and gravity data do not prove or disprove the various hypotheses put forward to explain the deposition of the Mesozoic-Cenozoic sedimentary rocks, but the large variability between the tomographic models indicates that it is unlikely that the mantle would play a major role in the subsidence of the Congo Basin. The project was funded by an IS-DAAD collaboration grant and by the Geological Survey of Norway.

The c2c (crust-to-core) Marie Curie Research Training Network aims to enhance understanding of the changing chemical and physical properties of slab material as it is compressed and heated in response to sinking into Earth’s interior, its interaction with the surrounding ‘unperturbed’ Earth, and the quantification of material fluxes. The network consists of 11 institutes in 9 countries. NGU participates with numerical models of subduction zone dynamics, focussing on slab dehydration and mantle wedge hydration, and sediment subduction. Our participation was funded by the EU and the Geological Survey of Norway.

The formation of extensional sedimentary basins

The project aims to provide an improved understanding of the dynamic development of sedimentary basins and their geometries. To this purpose, we view the formation of extensional sedimentary basins as a surface expression of mode selection occurring on a crustal scale. We predict modes of deformation by using an analytical analysis of the rate of internal dissipation of energy and the gravitational rate of work. Results of finite-element calculations of equivalent simple models agree with the analytical mode predictions.

The figure shows an example of the formation of a sedimentary basin by extension. The centre 200 km out of the 400 km modelling domain are shown. The frictional strength of the model materials softens with increasing strain. The basin is always kept completely filled with sediments (the different shades of yellow indicate different times of deposition), which also undergo strain softening. The grid in the figure is used to track material properties and visualises deformation; it is not the calculation grid (which is more dense). Calculations used sopale, developed by the Dalhousie Geodynamics Group. 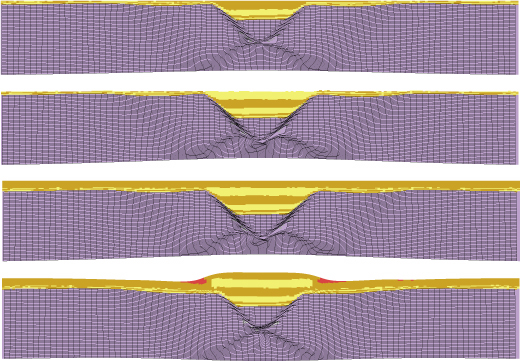 Basin inversion is the process of shortening an extensional sedimentary basin whereby the basin fill is uplifted and partially extruded, and pre-existing faults are re-used. Mild to moderate basin inversion has, among others, been identified on seismic profiles in the North Sea and the Alpine foreland. It is characterised by uplift of the basin fill, folding of syn- and post-rift sediments and (partial) reactivation of normal faults. Examples of strong or complete inversion can be found in the Alps and Pyrenees. Folding, faulting, fault rotation, fault reactivation and extrusion of the basin fill play a role in the generation of sometimes complex deformational structures. We used numerical experiments to a) investigate structures resulting from basin inversion and b) understand why extensional basins remain weak enough over several tens of millions of years to localise shortening and invert.

Detachment of the deeper part of subducted lithosphere causes changes in a subduction zone system which may be observed at the Earth’s surface. We determined the range of displacement magnitudes which can be associated with slab detachment using numerical models. The lithospheric plates in our models have an effective elastic thickness, which provides an upper bound for rapid processes, like slab detachment, to the surface deformation of lithosphere with a more realistic rheology. Subduction with a non-migrating trench system followed by detachment leads to a maximum surface uplift of 2–6 km, while this may be higher for the case of roll-back preceding detachment. Overall, surface uplift of these magnitudes is not diagnostic of slab detachment since variations during ongoing subduction may result in similar vertical surface displacements.

Lithosphere of the Adriatic plate has been subducting in a westward direction beneath Italy during several millions of years. Some regional tomographic images of the subducted Adriatic lithosphere have suggested that it is detached at depth. Wortel and Spakman (1992, Proc. KNAW 95) hypothesize that this is the result of propagation of a horizontal tear in the subducted lithosphere southwards along strike of the convergent plate margin. The resulting re-distribution of slab pull loads is expected to change vertical and horizontal motions at the surface. We investigated the effects of slab detachment below Italy on surface topography. We find that slab detachment below Northern Italy would lead to significant surface uplifts. However, from our flexure models we conclude that a trend in vertical loads along strike of the Apennines cannot be inferred from Plio-Pleistocene deflection data.